Create an Account - Increase your productivity, customize your experience, and engage in information you care about.

The City of Cameron’s, Cameron Memorial Airport is a Regional Airport conveniently located in north central Missouri directly next to major highway systems U.S. Highway 36 and Interstate 35.  The Airport is approximately one mile southwest of city limits at 11766 NE State Route A, in northern Clinton County.

In addition to the City of Cameron, the Airport serves the immediate four-county area of Clinton, DeKalb, Daviess, and Caldwell, along with many other nearby counties. There are many benefits and advantages that make Cameron Memorial a favorite stop to pilots and business travelers alike.  One such benefit is the location just outside the busy Kansas City airspace making it expedient as a fuel stop for transients while offering some of the most competitive fuel prices and excellent service.

The Airport Manager is available Monday through Friday, 8:00 am to 5:00 pm, and staff is on-call Saturday and Sunday.  The Cameron Memorial Airport is a publicly owned, public-use general aviation facility operated by the City of Cameron, a division of the Public Works Department and managed by a full time city employee, Airport Manager Eric Evans.

The Cameron Memorial Airport began in 1969 with land acquisition and initial construction.  Since then the Airport has continually grown to keep pace with the continued economic growth of the surrounding areas.  A few notable additions throughout the years include the addition of the 4,000’ x 75’ concrete runway and parallel taxiway in 1996, additional apron and ramp space for tie-downs in 2007 and the addition of a full time city employee as Airport Manager in 2007.  Other improvements have included a terminal building expansion, T-hangars, and 24-hour fueling capability. The most recent improvement occurred during the fall of 2011 with the addition of two new taxi lanes, directly off the existing taxiway to accommodate new private hangars.  This addition was driven by the demand for larger corporate hangar building sites to serve the increasing number and type of aircraft along with the ever increasing customer base.  Majority of the funding for these improvements have come from FAA Grants.

Cameron Memorial Airport is an economic benefit for the City of Cameron by serving existing businesses, attracting new businesses to the area, connecting the local and regional economies to the State and national economies, and serving as a window to the city to thousands of visitors each year.  The Missouri State Airport System Plan Study estimates the economic impact of the airport to the area at almost $600,000 annually.  In addition, airports provide recreational and education opportunities, supporting emergency and law enforcement activities, and business development.

The Airport continually strives to improve its services and availability to its customers with many short and long-term development goals.  Part of this planning process involved the update of the Airport Layout Plan (ALP) in 2009.  An ad-hoc group of local pilots donated their time to assist in this process.

An ALP is a graphic depiction of existing and future facilities and property that may be necessary for the operation and development of the airport in order to properly accommodate future demand. In addition, the ALP is a document between the Airport and the FAAproviding detailed information on airport and runway design criteria, which is necessary to define relationships with applicable FAA standards.  Furthermore, to continue to receive federal funding, the airport shall keep up to date at all times an Airport Layout Plan.

Through this process the need to protect the airspace from encroachments of hazardous obstacles, such as buildings, communication towers, trees, light standards, etc, was identified.  After months of public meetings and review the City of Cameron, Clinton and DeKalb Counties and the Grand River Township all enacted legislation for the protection of the airspace.   More information can be found at the City's Airport Height and Hazard Zoning Ordinance and the FAA. 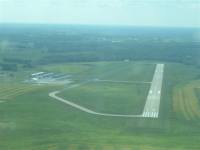